Due to the concentration of computer equipment and data in a datacenter, the degree of potential damage that could occur from both a fire and conventional fire-extinguishing systems is unacceptable. Take for example, a server monitor that gets overheated, starting a small fire in Media Services. Before the fire was extinguished by a suppression system, only the computer monitor was destroyed. But once the fire was extinguished, the damage was much more extensive. Soot covered everything in the suite, from computers to photographs to cameras. The rooms were uninhabitable, forcing Media Services to relocate while a specialized contractor cleaned up the smoke damage. Smoke from today’s fires is particularly nasty; burning plastic materials create a corrosive smoke that destroys electronic equipment.

Successful fire protection of computerized equipment facilities relies heavily on proactive fire prevention strategies. In the medical field, there is the saying “a grain of prevention is worth more than a pound of treatment.” FirePASS® (Fire Prevention And Suppression System) fire-preventative normobaric hypoxic environment provides the ultimate solution for the fire safety problem in computer rooms.

FirePASS® by providing effluent ventilation of the protected facility with hypoxic (oxygendepleted) air produced by FirePASS® generators from ambient air. This creates a comfortable human-breathable atmosphere inside a facility, in which nothing can ignite or burn. This environment corresponds in partial pressure of oxygen to the altitude of 9,000′, is completely safe for people and even provides unique health benefits. Exhaustive studies show that such a hypoxic gaseous environment is in
fact healthier for humans than normal ambient air at sea level.

This environment can be used as an alternative, but also as a complementary or supplementary option, which enhances the conventional fire-safety means without interfering with their performance, or even providing synergistic fire-safety effect. There is no need to remove an existing sprinkler system from your premises, simply because it will never be activated. Physically preventing the ignition process, the FirePASS® reduces risk of fire (as well as the fire-extinguishment related damage risk) virtually to zero. 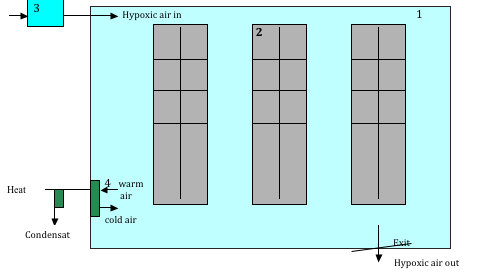 The system works as follows: a). Ambient air is drawn into FirePASS® Hypoxic generator where it is purified and made hypoxic. b.) The hypoxic air ventilates the entire room inhibiting any common ignition sources; c.) Hypoxic air leaks from the room thus completing the flow and ventilating the facility. A slightly positive pressure inside the room allows to keep all dust and impurities from entering the area. Hypoxic air is sterile, which provide absolutely clean environment. d.) Air conditioning must be split-type closed dedicated system.

FirePASS® fire preventative environment for a datacenter can be applied in different ways:

In each case the necessity to evacuate heat produced by computer hardware, should be considered. In case of a small heat emission, the enclosure ventilation provided by the continuous flow of the hypoxic agent would be sufficient. In a case of a larger heat emission, an installation of a split air-conditioner unit is required (can be delivered by FirePASS Corp.).

An electrical hazard, such as short-circuit in the fire-preventative atmosphere of FirePASS® result in smoke and excessive heat production and shall be detected with smoke and heat sensors. This will be followed by alarm and automatic interruption of the electric supply of computers and ancillary equipment, thus eliminating the very source of ignition. Such a procedure prevents even minor initial damage to the hardware and data.

According to existing codes, a PC room or any facility with continuously energized equipment shall be equipped with conventional fire-suppressive means, such as clean agent system or sprinklers. However, introducing the FirePASS® eliminates the very cause of fire-suppressive system activation. In case of a fire in the ambient atmospheric air, sprinklers would be activated only locally, where breakout of fire
causes destruction of the thermo-sensitive element in the sprinkler head. Therefore, there will be no sprinkler activation in the FirePASS® protected room, where ignition and fire are physically impossible, and no smoke or water related damage at all. Moreover, the initial fire-related damage, which causes the sprinklers to open, would be completely prevented in the FirePASS’ protected room.

As an option, we emphasize that you only need to install and certify the conventional sprinkler fire-suppression system. Combined with our complementary fire-preventative system, your facility will be completely protected. Consequently, you meet or even exceed the standards set forth by your local authority while simultaneously minimizing the risk of the damage to your hardware and loss of data.

With FirePASS® proactive system your data center or computer room will be fully protected!