FirePASS, used in suppression mode, operates in a fashion similar to other inert gas total flooding systems with the goal being to reduce the O2 content of the protected space to the requisite combustion inhibition level.  The FirePASS-Suppression system has the ability to extinguish all class A, class B and class C fires while offering added defense against re-ignition even in deep-seated fires.  This is all done with a level of respiratory safety unmatched by other systems.

The FirePASS-S agent is simply hypoxic (oxygen reduced) air.  The hypoxic air is air containing 10-12% by volume (variable) O2 and approximately 87-89% N2 by volume.  Nothing is added to the FirePASS agent.  The use of hypoxic air as a flame extinguishing agent retains the advantageous characteristics of N2 (IG-100) total flooding systems while simultaneously providing an unparalleled safety factor. 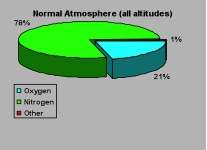 Because the inerting properties of N2 give hypoxic air the ability to suppress fire and nothing more is added to the agent, FirePASS-S is implicitly directly analogous to other N2 (IG-100) systems.  All NFPA published figures regarding IG-100 can simply be adapted to account for the presence of premixed oxygen contained in hypoxic air.

For instance, the NFPA standard lists the n-Heptane cup burner extinguishment concentration for IG-100 as 31% by volume; simply accounting for an addition 12% O2 by volume yields the FirePASS-S’ extinguishing concentration.

If FirePASS-S extinguishing figures are analogous to present IG-100, what is the advantage of using the FirePASS suppression system?  The advantages are actually quite profound.

The United States Environmental Protection Agency considers FirePASS agent to have 0 effect on atmosphere and has approved it for fire protection.

US EPA Considers FirePASS- S to have no toxicological side effects.

FirePASS-S, using hypoxic air as its inerting agent, yields toxicological results identical to that of IG-100 and thus, falls into NFPA Physiological Effects for Inert Gas Agents list which states:

Though chemically parallel to IG-100 systems, employing hypoxic air vs. pure N2, guarantees that the O2 level in the protected space cannot drop below the built in safety levels (10-12% O2 by vol.).  This is done without any complex O2 sensors or feedback and adjustment systems.

Unlike all other inert gas systems, FirePASS Suppression technology has an absolute safety threshold, which is oxygen % of the hypoxic agent released (generally from 10% to 12%).

An incapacitated or unconscious occupant breathing the FirePASS agent will only suffer effects similar to that of being at the top of a ski mountain while the inhalation of pure N2 or pocket a of high N2 concentration can be fatal.  In addition, since the inclusion of O2 into the inerting agent yields aforementioned flame suppression benefits, less toxic combustion products are less likely to reach poisonous concentration levels.  Furthermore, continuous safe ventilation of hypoxic air will automatically clear the environment of toxins while simultaneously ending smoldering.  The built in O2safety level present in FirePASS-S must not be discounted as it extends an unprecedented blanket of respiratory protection to occupied spaces. 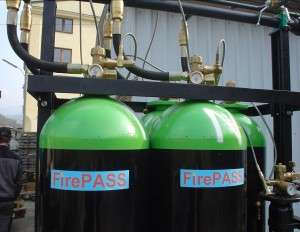 FirePASS agent can be kept in standard cylinders or any other vessels. 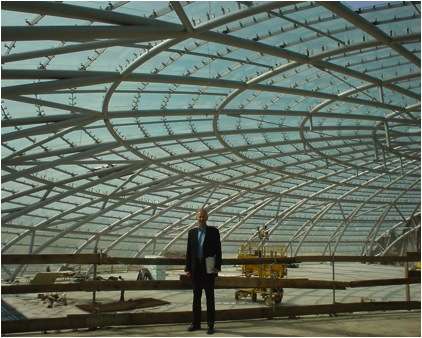 FirePASS is the only solution that can protect extremely large spaces.

Hypoxic agent can be kept, under pressure, in a large vessel to be released when fire detected. Cold and dense hypoxic air will quickly replace the internal atmosphere forcing smoke and other gaseous combustion products out.